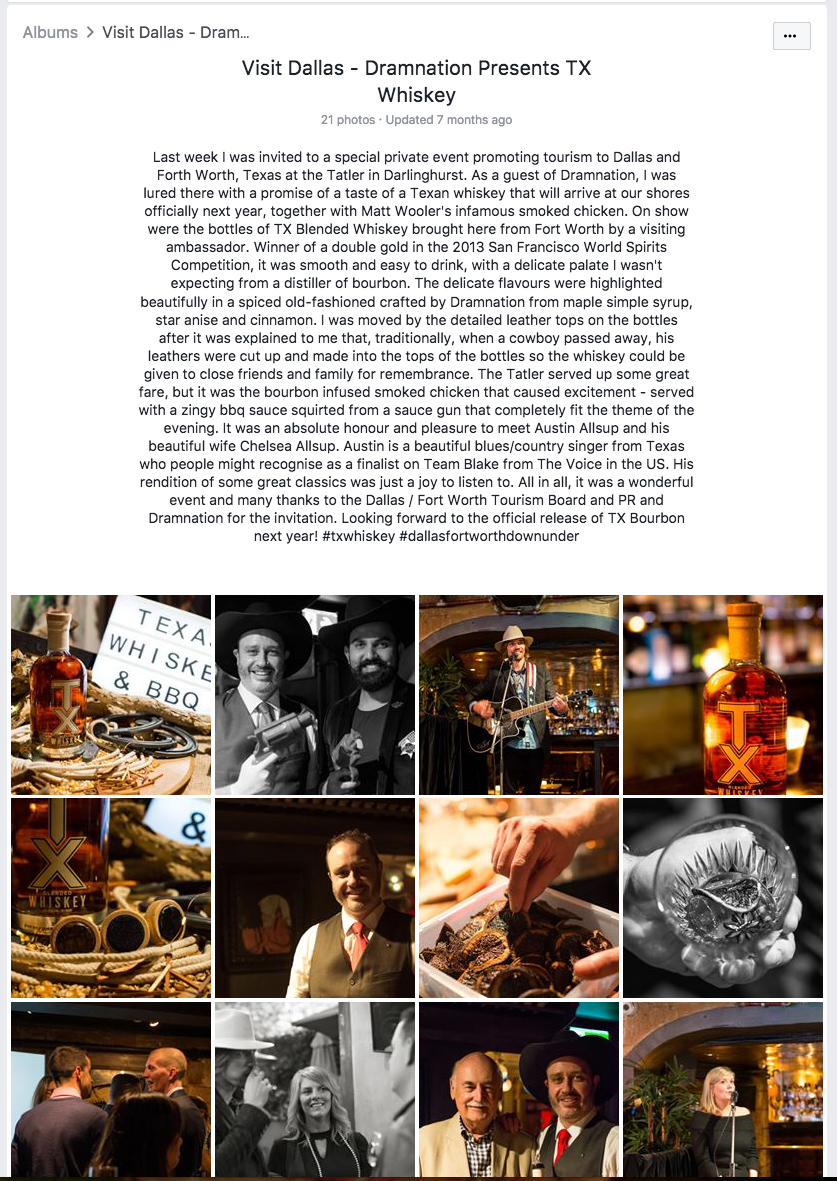 Last week I was invited to a special private event promoting tourism to Dallas and Forth Worth, Texas at the Tatler in Darlinghurst. As a guest of Dramnation, I was lured there with a promise of a taste of a Texan whiskey that will arrive at our shores officially next year, together with Matt Wooler's infamous smoked chicken.

On show were the bottles of TX Blended Whiskey brought here from Fort Worth by a visiting ambassador. Winner of a double gold in the 2013 San Francisco World Spirits Competition, it was smooth and easy to drink, with a delicate palate I wasn't expecting from a distiller of bourbon. The delicate flavours were highlighted beautifully in a spiced old-fashioned crafted by Dramnation from maple simple syrup, star anise and cinnamon. I was moved by the detailed leather tops on the bottles after it was explained to me that, traditionally, when a cowboy passed away, his leathers were cut up and made into the tops of the bottles so the whiskey could be given to close friends and family for remembrance.

The Tatler served up some great fare, but it was the bourbon infused smoked chicken that caused excitement - served with a zingy bbq sauce squirted from a sauce gun that completely fit the theme of the evening.

It was an absolute honour and pleasure to meet Austin Allsup and his beautiful wife Chelsea Allsup. Austin is a beautiful blues/country singer from Texas who people might recognise as a finalist on Team Blake from The Voice in the US. His rendition of some great classics was just a joy to listen to.

All in all, it was a wonderful event and many thanks to the Dallas / Fort Worth Tourism Board and PR and Dramnation for the invitation. Looking forward to the official release of TX Bourbon next year! #txwhiskey #dallasfortworthdownunder

- May Lawrence / The Gastronomical

Find this article and associated event photography at The Gastronomical Facebook.