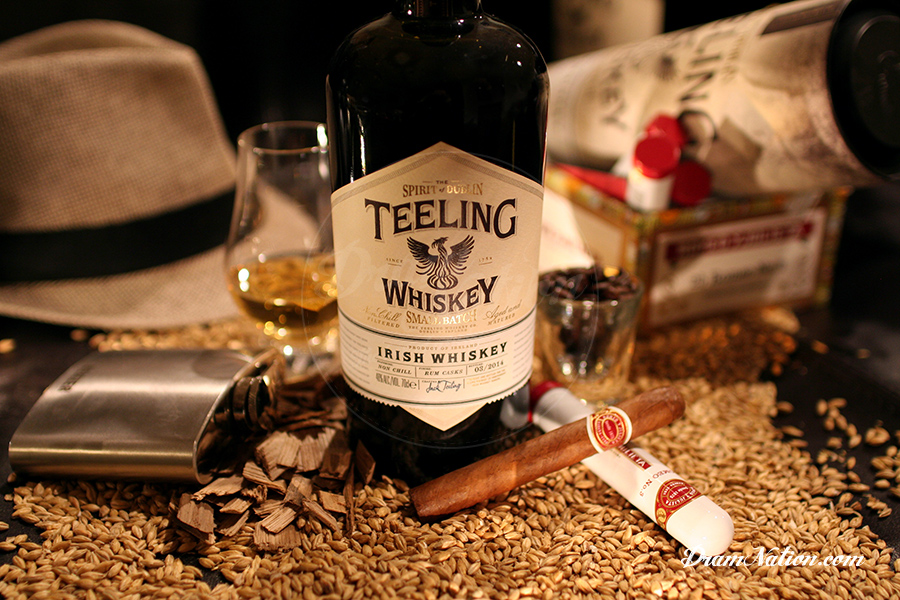 Bright woody spice muddled with vanilla & coffee notes. Creamy and spicy with a good dash of residual molasses bonding to the palate in an oily nature. Basically it has great texture.

Long and woody with a spice prickle to the lips and a drying palate.

Teeling Small Batch is a blended whisky of vatted malted barley and corn grain in a reported ratio of 35% malt whiskey to 65% grain whiskey (these ratios have not yet been confirmed). Even without knowing those ratio's, we find in this expression a clear high grain influence that seems to be emphasised by the rum casks. Going against the public perception that all Irish whiskies are triple distilled, Teeling makes use of the double distillation method. The process, combined with rum cask finishing is nothing new in the world of whisky but, it is something to look into when it comes to Irish. Though Teeling had its original production at the Cooley Distillery, the company has created something new and unique standing out against the other Irish labels with this small batch rum cask finish. Now with Teeling building their own distillery, it can be assumed there is going to be something great in the making.

The Teeling family have been making and involved in the Irish whiskey scene since 1782.

Mid 2015 will see Teeling slowly break off from production under the Cooley Distillery roof as they open doors to their own distillery in Dublin. Dublin has not seen an active distillery since 1976 and no new distilleries built in 125 years.

The Spanish word "Flor de Cana" loosely translates to "Sugarcane Flour" and is also a brand of Rum from Nicaragua. These ex-rum casks deliver another level of uniqueness to the Teeling Whiskey Small Batch.

Note the spelling whisk(e)y. Irish distillers will usually spell whisk(e)y with an 'e' just as many U.S. distillers do the same, unlike Scotland and Australia which do not. Though there are many myths about why this is the case, there is clear correlation to the fact Irish whiskey was far more popular in the U.S. prior to prohibition. At that time the use or removal of the 'e' was an obvious way of defining Irish to Scottish whiskies. When prohibition was repealed, the U.S. distillers that grew again retained the use of the 'e' even though Scottish whisky became the more popular spirit to import. Australian whisky roots come from Scotland and so our country leans towards dropping the 'e'.