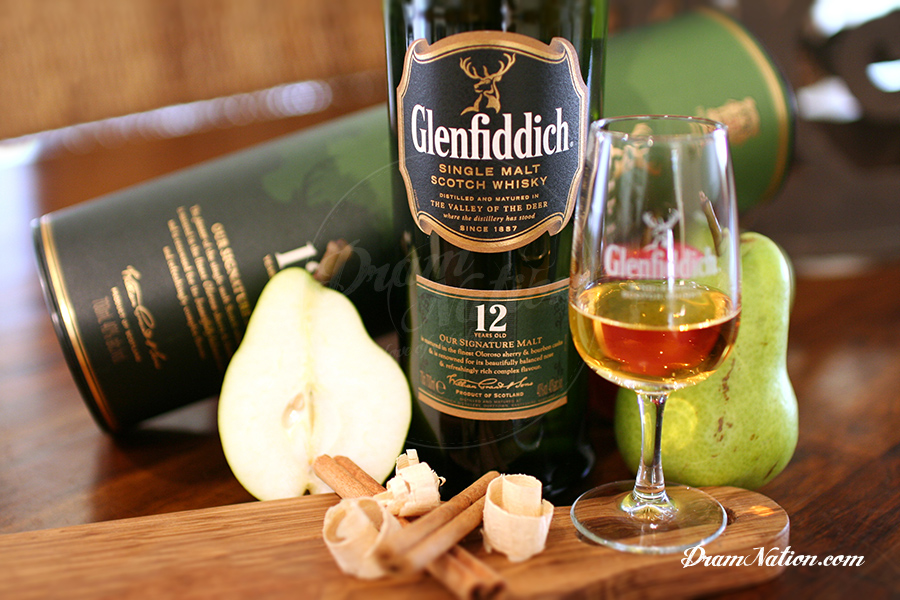 Stone fruits and fresh cut pears and a cinnamon tickle.

Fresh cut pears develop to include a variety green skin fruitiness in the front of the palate with honey sweetness towards the middle. Vanilla toasted oaks become apparent while a black pepper and dried fruit spice display towards the back.

Tending towards a long drawn finish in the chest the spice and honey continue to marry and warm in the mouth.

Bottled at 40% ABV the Glenfiddich 12 year old is the signature whisky produced by the Glenfiddich distillery. Aged for a minimum of 12 years in both American ex-bourbon and Spanish ex-sherry oak casks this whisky displays all the characteristics of a typical Speyside Scotch Single Malt Whisky. Typical descriptors for a Speyside are fruits orchards, floral honeys, fresh morning forest air. The Glenfiddich 12yo typical displays a characteristic of cut pears, sweet oak shavings, and spicy cinnamon apples.

The Glenfiddich 12yo is the launch platform into The Hills Whisky Appreciation Course that typifies the characteristics of a Scottish whisky. The Glenfiddich is not the most awarded Single Malt in the world for nothing.

The Glenfiddich distillery is one 3 single malt distilleries owned by the family run William Grant & Son’s.

The Glenfiddich is one of the 3 primary malts vatted to make the Monkey Shoulder Triple Malt Blend.

It is no coincidence that the Glenfiddich bottle shape is identical to the Grants Whisky blends bottles. The Grants blends were named after the founder William Grant who established Glenfiddich in 1887 and, contain a portion of Glenfiddich in the blending process.